Rixan Associates, Inc. developed a unique take on the vibratory bowl feeder concept by using machine vision to replace the channels and guides in order to handle a virtually unlimited number of parts within a certain size range. The feeder uses the vibratory bowl feeder concept to randomly present the parts in the bowl in any possible orientation. When the vision system views the right part in the right orientation, it stops the feeder and sends the part’s location to a robot which loads the part into the press. The Rixan RFS-1000, flexible vibratory bowl feeder system, provides a 20% improvement in productivity and eliminates the need for an operator, providing less than a one year return on investment for most users.

Traditional vibratory bowl feeders use a helical shelf-like inclined ramp winding upwards from the bottom of a bowl to a discharge passageway. The passageway’s reciprocating motion pushes the parts up the ramp. Obstructions, cutouts, and other orienting devices are arranged along the passageway to topple off parts that are improperly oriented and allow through only those parts that are properly oriented. Vibratory bowl feeders are normally able to handle only a single family of very similar parts. Each different part in a family requires changing or adjusting the obstructions and orienting devices which can take considerable time. As a result, despite its high efficiency and relatively low cost, the vibratory bowl concept is usually not seriously considered for applications involving large numbers of different parts.

Stephen Harris, President of Rixan Associates, felt that recent improvements in the speed, accuracy, and reliability of vision systems would make it possible to use a vision system to replace channels and guides to deliver a flexible vibratory bowl feeder. Harris got the opportunity to validate this concept when he competed for a potential customer processing a wide variety of high-value aerospace fasteners in a stamping press. Previously, an operator picked parts out of a bin and loaded them in the proper orientation in the press. The manufacturer wanted to automate this operation because of the potential danger involved in having the operator place his hands into the press. Additionally, the repetitive nature of the task required the operator to take frequent breaks which limited the productivity of the application.

Rixan selected Cognex's In-Sight vision system and a Mitsubishi Electric RV-6SL-S11 robot that have been integrated through a joint development effort between Cognex and Mitsubishi Electric. Mitsubishi Melfa-Vision software incorporates robotic programming software as well as Cognex In-Sight Explorer software to set up both the robot and the vision system simultaneously as an integrated solution. This new approach makes it easy to create vision-driven robotic applications with capabilities such as locating and inspecting parts that go far beyond what robots alone can accomplish.

Melfa-Vision includes standard job programs supporting most common robot applications, enabling novices to easily develop robotic vision applications with up to three robots and seven vision systems. Rixan engineers picked the Mitsubishi Electric robot because it is fast—moving at up to 6 meters per second—and because it has a long reach. They selected the Cognex In-Sight vision system because it provides up to seven times the processing power of other models and acquires up to 60 full 8-bit images per second.

To develop the application, Rixan engineers first ran the Melfa-Vision wizard that calibrates the robot in relation to the feeder. Then, they put a part in the robot gripper in the ideal orientation for pickup. They jogged the robot over the feeder and set the part down on the plenum. This process taught the robot to pick up the part in this orientation at this point on the plenum. Next, they selected a Melfa-Vision wizard that runs the Cognex object location tool and drew a rectangle around the part on the screen. The tool instantly recognized the part in the zero angle of orientation. This process, which took only a few minutes, is all that was required to program the feeder to handle a single part. 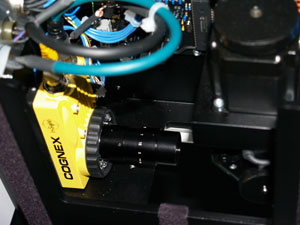 Modular Digits
Up to 2000 inspection positions with one vision system 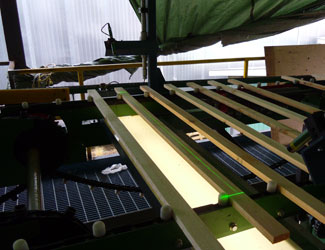 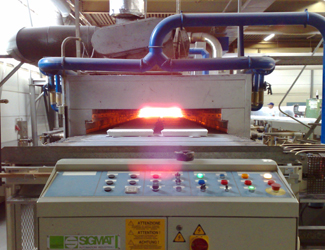