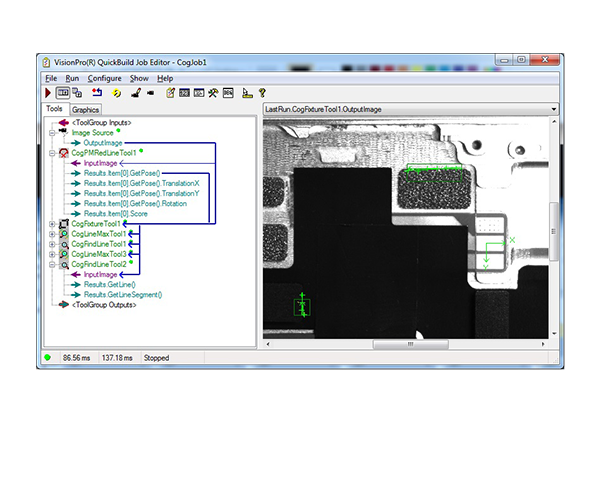 JMP Engineering faced similar challenges with this automation process.  In this case, thread protectors are installed on oil and gas pipes to prevent them from being damaged during shipping. The parts are assembled at relatively high volumes but none of the individual parts are produced the volume normally needed to justify automation. This manufacturer wanted to assemble thread protectors at a rate of about three per minute. The task of assembling the cap to the pipe is done with pneumatic tools but the high levels of torque involved make it a demanding physical challenge.

JMP programmers wrote a graphical user interface for the workcell in Visual Basic that performs vision operations by calling vision tools from the Cognex VisionPro® library. VisionPro provides pre-configured, tightly integrated acquisition support for the complete range of industrial cameras and video formats. Its QuickBuild™ application development environment makes it possible to configure acquisition tools, define vision tasks and make pass/fail decisions without any programming. The VisionPro library includes tools such as PatMax®, PatInspect®, PatFlex®, IDMax®, and OCVMax™, that gauge, guide, identify and inspect parts despite variations in part appearance due to the manufacturing process.