Advantages of iOS devices in Manufacturing Facilities and Distribution Centers

Apple’s iOS devices are used by millions every day to make calls, send texts, play games, surf the web, check emails, and even scan barcodes. These devices keep us all connected on a platform that prides itself on reliability, security, and most importantly, an intuitive, consistent user experience. Although it was originally conceived for consumer use, iOS has emerged as an essential part of the toolkit needed to run a successful enterprise as well.

The adoption of iOS for most companies has come in the form of the iPhone, used to connect employees with partners, customers, vendors, suppliers and each other. iOS provides a platform where custom apps can be developed quickly (much quicker than Windows) to do exactly what you need them to do, such as:

Beyond the iPhone, other devices like the iPad and iPod can be used to deliver all of the power of the iOS platform to different device requirements. Regardless of the device form factor, iOS has brought the same reliability, security, and ease of use from the consumer world and turned it into one of the most powerful productivity tools a company can use.

Following a successful integration into enterprises as a communication device, industrial environments have started integrating iOS devices into their workflows. The stability and reliability of these devices helped ease some of the issues these environments faced with legacy Windows devices. In fact, with the recent “end of life” of Windows CE, many warehouses and manufacturing facilities are forced to adopt modern operating systems (iOS or Android). In many ways, the purpose-built devices that have moved from Windows CE to Android are still subject to the complicated version control, security patches, and hardware from a variety of manufacturers. Implementing iOS in these environments provides the same reliability, security, and device management that increases productivity in the non-industrial workplaces.

The most apparent advantage of implementing iOS in industrial environments is the instant user familiarity. The workforce is getting younger, especially during peak seasons where users need to be trained up quickly for a few months to manage higher throughput. When an ecommerce distribution center is working to bring seasonal employees up to speed, handing them a device running a familiar iOS user interface cuts down training time and costs significantly. Another advantage is productivity. VDC Research has seen it take roughly 75 hours versus 118 hours to reach max productivity when comparing modern mobile solutions versus legacy devices and platforms.

There are some challenges in using iOS devices “as is” in these environments. The first concern is that iOS devices are not rugged enough to stand up to the wear and tear of industrial environments. Another concern is around the data capture that is usually a center-point of purpose-built devices.

Specialized companies like Cognex have developed mobile terminal products that encase and ruggedize the iPhone or iPod, as well as add advanced barcode scanning functionality. These products prepare iOS devices for even the harshest environment without taking away from the productivity apps and tools. Mobile terminal products are also designed to be modular, allowing the iPhone or iPod to be switched out as new technology becomes available. This approach decreases the total cost of ownership by nearly $125,000 over five years. 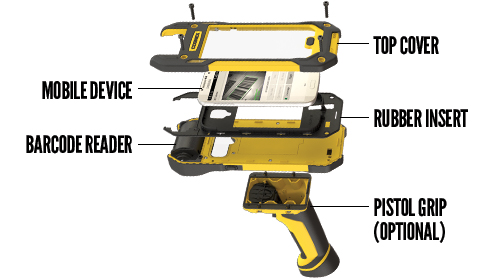 The iOS platform has already made a significant impact on how enterprises conduct business, but it’s clear that the next big disruption will be injecting iOS even further into these enterprises. Warehouses and distribution centers will benefit just as much, if not more than the rest of the world by leveraging iOS as a productivity tool to take them to the next level.