Robots and the Future of Retail Distribution and Fulfillment

Online sales are increasing dramatically and are now 20% of total retail sales. Consumers now expect one to two-day delivery, while not wanting to pay extra for it. Retailers competing with Amazon are trying out new distribution models such as buy-online-pickup-in-store (BOPIS).

These demands are running into the limitations of current automation in the distribution center (DC), which still has a substantial manual component. Picking, packing, sorting, and shipping functions are all under pressure to increase efficiency, and hiring difficulties are making appropriate staffing a challenge.

DCs and fulfillment centers see their salvation in robotics. Various forms of robotics are increasingly substituting for humans in repetitive, physically strenuous tasks, saving employees for more valuable tasks. Robots can work around the clock, don’t drop in efficiency toward the end of a shift, and do not get injured. They can also be modified and upgraded as needed.

Warehouse robots are designed to do specific sets of tasks, and so come in different types. It’s worth taking a look at the various flavors of robotics to see how quickly DC operations are changing, and what direction they are headed.

Moving heavy materials around a warehouse used to take a human and a forklift. But AGVs have been moving into the bulk movement of goods for decades now. They follow predetermined tracks, originally magnetic floor strips but now often laser-guided using LiDAR. Laser tracks are more easily rearranged as needs change, and in today’s competitive environment, needs change frequently.

Having largely taken care of forklifts, AGVs now serve as an alternative medium for conveyors by pulling shelves of goods to picking stations. Some read barcodes and can travel to any divert or inductions station along their path. Their routes can be modified much more easily than conveyor systems. 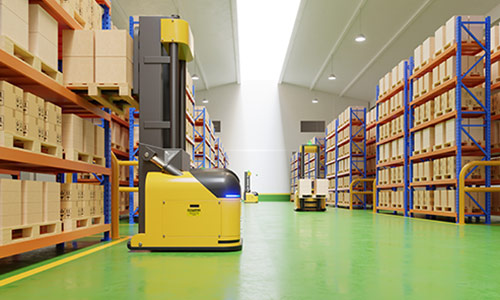 An AMR is equipped with a variety of sensors, maps, and processing power that allows it to create its own routes to the required destination, instantly rerouting when encountering obstacles, rather than being limited to predefined paths like an AGV. They can use machine vision to read 2D codes on the floor and know exactly where they are.

Zone-picking AMRs with access to location data travel through the DC from one goods location to another with an order bin, showing humans where desired SKUs are located by shining a light on them, called pick-to-light, then moving on to another location until they have picked the full order and move to the packing station.

Goods-to-Person (G2P) AMRs instead move mobile shelves with the correct SKU to a picking station where humans, again using pick-to-light, pick items off the shelf and put them in the order bin.

If there is any kind of robot that you’re likely to encounter in the front of a store, rather than in the back, it is an AMR, moving through the aisles to pinpoint locations where items are out of stock, detecting hazardous spills that might lead to expensive slip-and-fall accidents, and serving as deliberately cute store ambassadors.

A vision-enabled AMR with an embedded image-based barcode reader can identify objects by barcode, or, with machine learning, by sight alone, so they can pick desired SKUs out of a group of similar but slightly different products more effectively than humans can. 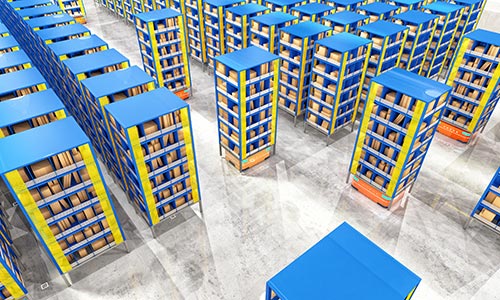 Factories have long been filled with robotic arms that bolt, weld, and paint, but logistics operations are less predictable and more complex than assembly lines, so it has taken longer for them to appear in the DC. They are now showing up in increasing numbers.

Their initial uses have been to replace humans in physically challenging, repetitive tasks, such as loading empty cartons to an overhead conveyor, de-palletizing and racking incoming products, palletizing large orders for shipping, and sorting units into outbound shipping lanes.

But they increasingly work alongside human works as cooperative robots (cobots) at G2P workstations. Depending on the goods—robot arm grippers still have trouble with heavy and oddly shaped items—AGVs can move their mobile shelves to robotic arms for order fulfillment, no human necessary.

Vision systems guide arms to find and pick up objects in various shapes and orientations, despite reflections and other visual confusion. 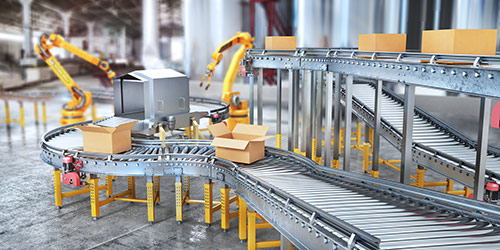 Now found in the heart of many DCs, as well as in the back of an increasing number of brick-and-mortar stores, ASRS units are essentially large, enormously capable vending machines. In a DC they can be many stories tall, with hundreds of thousands of storage cells, in a local convenience or grocery store they are smaller, tucked away in the back. They increase inventory storage density in space-constrained urban locations, improve order-picking accuracy, and increase throughput.

ASRSs can come in a wide range of configurations, including vertical and horizontal carousels that move product to human operators rather like shirts at a dry cleaner, large-capacity heavy-lift modules, fixed and movable unit-load aisle systems, and systems that use tracked shuttles or AMRs to retrieve trays that go to human operators who use pick-to-light to select items.

ASRS applications use a range of image-based barcode readers to identify the correct products and storage locations. A 3D dimensioner above the entry lane ensures that boxes will not jam when placed by the shuttle. 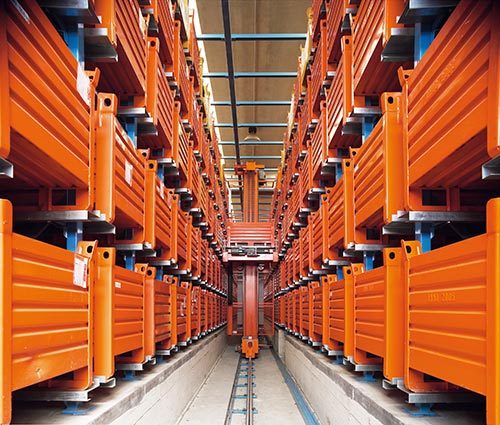 Get used to them, because they’re already here

Robots are an increasingly cost-effective way of meeting the challenges of omnichannel sales, even as the number of SKUs rises and single-item orders are increasingly common. As their capabilities increase and their prices fall, they will inevitably take on larger roles in the distribution center.
cgnx_pdf Robotics for Retail Applications Guide
Tags: Vision - Guide Align, ID - 1D Low Speed, ID - 2D Printed, Retail Distribution, Logistics, Barcode Readers, Machine Vision
SUBSCRIBE

What to Look For in an Edge Computing Solution

What is Edge Computing?