Automatic text generation in email, voice recognition, medical imaging analysis, the colorization of old photographs, personalized online advertisements, strategy game-playing computers, and facial recognition to open your mobile phone are all examples how artificial intelligence is making our lives a little easier, a little more fun, a little more scary, and overall one could argue more interesting. And it's no different in factory automation where artificial intelligence in manufacturing is driving new approaches to complex and challenging inspection applications.

These AI-based applications are driven by deep learning, which is based on the work of neural networks.

Neural networks were first proposed in 1944 by Warren McCullough and Walter Pitts, two University of Chicago researchers who moved to MIT in 1952 as founding members of what’s sometimes referred to as the first cognitive science department.

What is a Neural Network?

At its core, neural networks are computer programs that are designed to mimic how a human brain operates. Each program in a neural network can only perform basic calculations. But by connecting numerous nodes together the computational power of the whole becomes greater than the sum of its parts. When a neural network passes input data from one program to another within the system the neural network is training itself and using that data to become smarter – similar to how humans learn information.

Neural networks, then, have become the method for how computers learn to perform certain tasks, say recognizing a specific face across different photographs or identifying what a dog is or isn’t from a reference set of dog pictures. 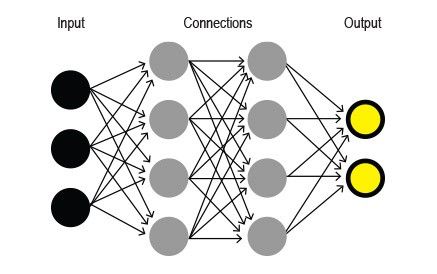 As data is passed through each layer of a neural network, the system trains and refines its outputs to be more accurate at the specific task it was set up to solve for. In a factory automation setting, for example, neural networks could be used to solve for complex defect detection or identify other product irregularities that are too numerous to create a ruled-based program for.

The way in which the system learns is by three methods:

The Impact of Neural Networks on Manufacturing Inspections

Let’s say an automotive parts company wants to identify scratches on a bumper they are manufacturing. Well, there’s no way to identify where a potential scratch may occur on a bumper. Looking for and identifying scratches can’t really be programmed effectively into a machine vision application because of the variation involved – scratches could be deep or shallow, they could be long or short, appear anywhere on the surface, etc.

Accounting for that variation becomes complex – unless, of course, there was the ability to train an application to identify what a good bumper looks like and then flag any bumpers that fall outside those parameters.

“Deep learning image analysis, which neural networks enable, will more easily allow companies to automate inspections that can be really complex or challenging with traditional machine vision,” says Ochiai. “Think of assembly verification which is mostly still performed by humans. Or defect detection is another example where this technology will help manufacturers in their automation strategies.”

The test of a neural network is its powerful ability to recognize patterns. But, as Ochiai notes, neural networks need very high-quality labeled data to successfully train its models. And, to complicate matters, it needs lots and lots of reference image data.

A Quick Look at Color Lighting and Filters for Vision Sensors